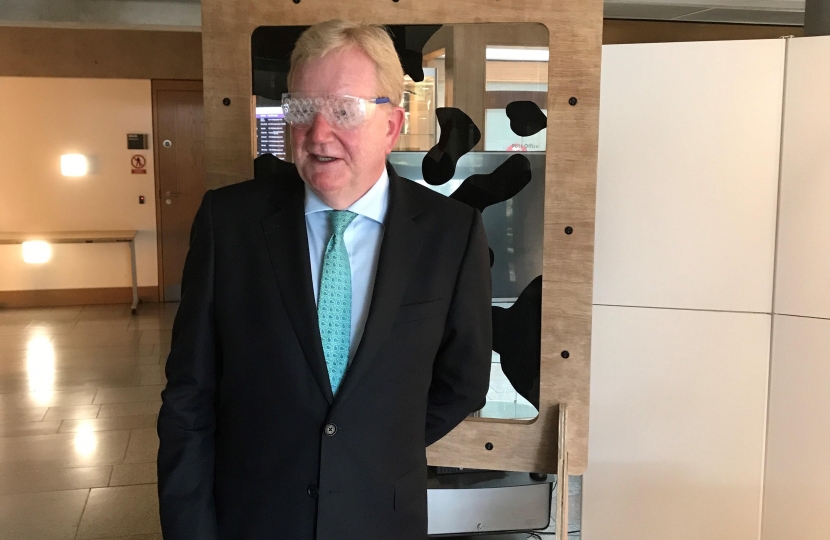 Jackson Carlaw MSP has met with representatives of RNIB Scotland at The Scottish Parliament.

RNIB Scotland is part of the Royal National Institute of Blind People group of charities, which was formed in 1868 and is the leading sight loss charity in the UK.

When speaking with RNIB Scotland representatives at Holyrood, Mr Carlaw tried on a pair of the organisation's 'cataract simulation glasses'.

The cataract simulation glasses allow users to experience the sight problems of individuals who have been diagnosed with a cataract.

There are around 180,000 people in Scotland and 2 million across the UK who are living with major sight problems.

RNIB Scotland actively campaign on a number of key issues such as prevention of sight loss and improving support for individuals who are diagnosed with loss of vision.

“I had a very good discussion with representatives of RNIB Scotland about the important work they are doing to support people who have experienced sight loss when they made a recent visit to the Scottish Parliament.

“I tried on a pair of cataract simulation glasses so that I could better understand the vision problems experienced by individuals who have been diagnosed with a cataract.

“Cataracts are one of the most common sight problems in Scotland and it was good to hear from RNIB Scotland that a larger number of patients in Eastwood are now undergoing successful operations to treat this condition.”