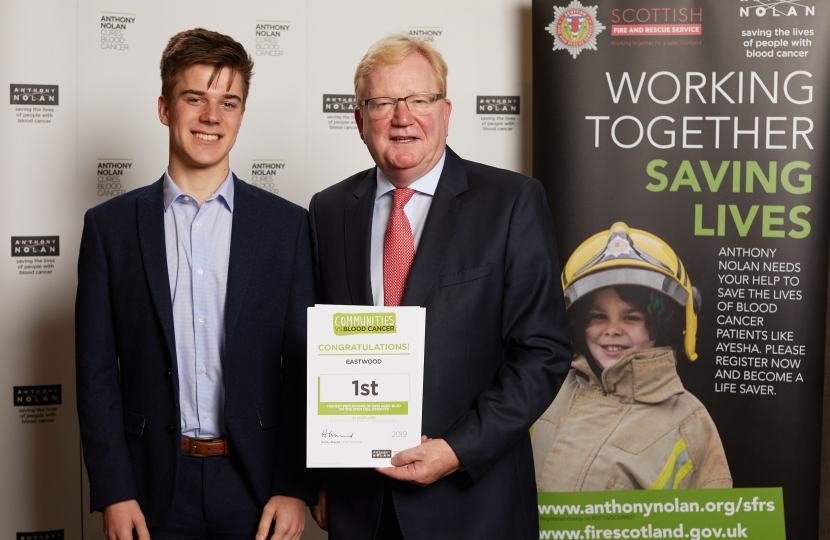 Jackson Carlaw MSP has welcomed news that Eastwood is number one in Scotland for the total number of males aged between 16-30 registered as stem cell donors.

Eastwood has also made the top 10 in Scotland for the total number of men registered as stem cell donors. 1545 people in Eastwood have signed up and this is an increase of 242 in the past year.

One of those to sign up in the previous 12 months is former Williamwood High School pupil, Jonny Connelly who was at the Scottish Parliament with Mr Carlaw for the presentation of the certificate.

Anthony Nolan are urgently looking for more people like Jonny who are aged between 16-30 to register as stem cell donors.

There is also a need for a higher proportion of men from Black, Asian and minority ethnic (BAME) backgrounds to sign up. Only 60 percent of transplants receive the best match and this falls significantly to 20 percent for transplant recipients who are from a Black, Asian or ethnic minority background.

Anthony Nolan is a charity whose objective is to save the lives of people who have been diagnosed with blood cancer. The organisation uses its register to match potential stem cell donors to blood cancer patients and blood disorder patients in need of stem cell transplants.

“Eastwood has been recognised as the number one Holyrood constituency in all of Scotland for having the highest percentage of men aged 16-30 registered as stem cell donors.

“I commend everyone in Eastwood who has selflessly chosen to become a stem cell donor and any one of them could offer someone living with blood cancer a second chance at life.

“One of those individuals is Jonny Connelly from Netherlee who was with me at the Scottish Parliament when I collected the certificate on behalf of Eastwood.

“I would certainly encourage others living in the constituency to follow Jonny’s example and sign up to become a potential lifesaver.”

“The Anthony Nolan Foundation’s work is fantastic and to know that by signing up on the register, I could potentially save a cancer patient’s life is phenomenal.

“The fact that it would take so little to give somebody a fighting chance at survival made it an easy decision to put my name on the register.

“ I would highly recommend that others do the same for this valuable cause.”