MP and MSP visit scene of break-in at Eastwoodmains Road 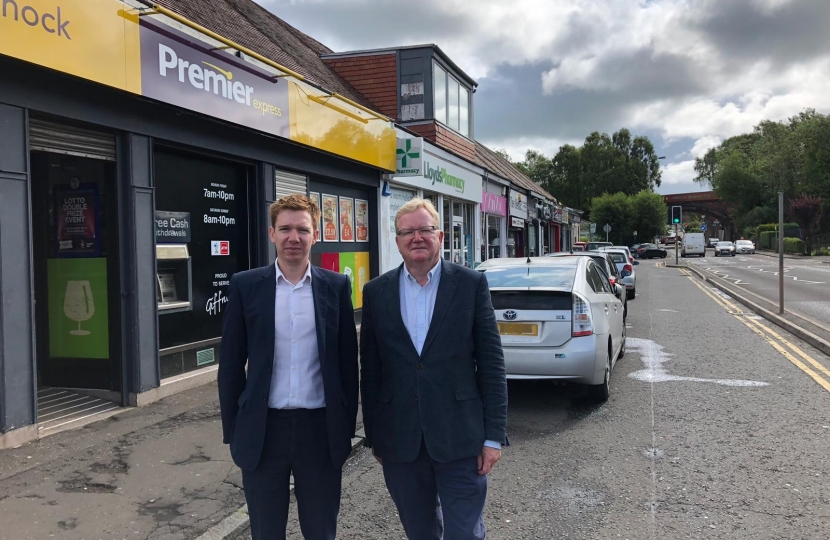 Paul Masterton MP and Jackson Carlaw MSP have voiced serious concerns over a pattern of increasing crime in Scotland after a criminal incident took place at the Dry Cleaning store on Eastwoodmains Road and with attempted break-ins occurring at the other premises on the row of shops in the early hours of the morning on Monday 19th August.

The break-in at the Dry Cleaners involved theft, smashed windows and tiles being pulled from the roof of the building.

Boot prints were left present on the back doors of the other stores where the perpetrators attempted to enter.

Mr Masterton and Mr Carlaw visited the shops on Eastwoodmains Road the day after the incidents took place to speak with shaken store owners and workers and to offer their support.

The Conservative politicians met with shop owners and staff on the same day new data published by Police Scotland showed that there had been a significant rise in crime under the SNP Government with the overall number of criminal offences between April to July rising to 65,107 compared with 62,377 for the same period last year.

The row of shops on Eastwoodmains Road are located between the junctions of Sutherland Drive and Etive Drive.

One of the shop owners advised Mr Carlaw and Masterton that CCTV footage of the incident shows three hooded youths responsible for the acts of criminality.

Anyone who has information about the incidents or perpetrators should contact the police on 101.

“After becoming aware of the incidents at Eastwoodmains Road, Jackson and I decided to visit the shops as a matter of priority and to meet with those who had been on the receiving end of the criminal behaviour.

“There is absolutely no excuse for disrupting local businesses by attempting burglary to grab any cash that might be available and regrettably, in one case the culprits were able to cause real damage and enter the premises.

“The robbery and attempted break-ins were deeply distressing and if anyone has knowledge of the events, we would urge you to report the information to the police.”

“On the same day it was revealed that criminal offences are soaring under the SNP, it is massively concerning to learn that the crime wave has spread to Eastwood.

“The targeting of popular local shops who provide a valuable service to the community is unacceptable and behaviour of this nature must not be tolerated.

“We have written to the local police and asked to be kept informed of any developments relating to the incidents at Eastwoodmains Road.”