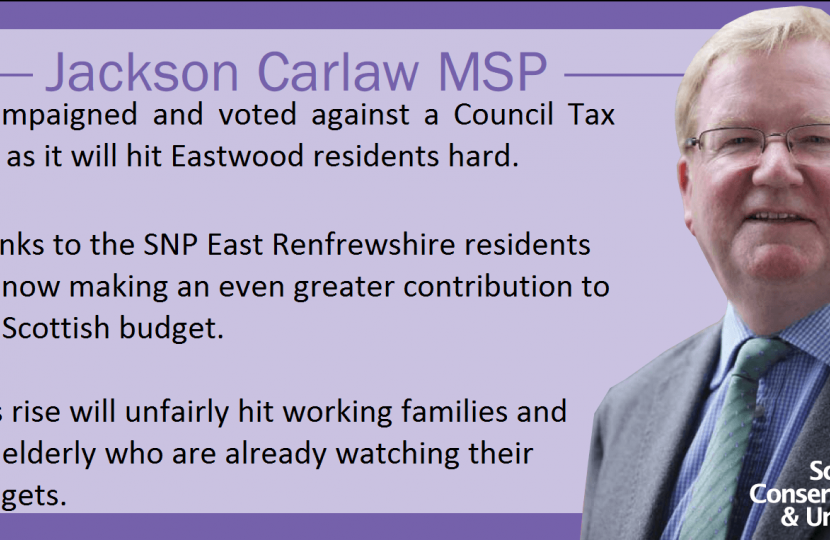 Today in The Scottish Parliament Council Tax rate rises were pushed through by the SNP.

The Scottish Conservatives have consistently opposed SNP changes to Council Tax, arguing that they are part of a programme of tax changes which could well make Scotland the highest taxed part of the United Kingdom

East Renfrewshire will see some of the highest rises with over 50% of property being in the top two council tax bands. This will see circa £4 million extra being raised each year from the East Renfrewshire Council Tax take.

Local councils will not keep the extra money raised with it being clawed back by The Scottish Government.

"I campaigned and voted against a Council Tax rise as it will hit Eastwood residents hard.

"Thanks to the SNP East Renfrewshire residents are now making an even greater contribution to the Scottish budget.

"This rise will unfairly hit working families and the elderly who are already watching their budgets.

"If the money had been staying locally and improving roads and the like then maybe more people could see the reason for a Council Tax increase, yet all of this extra money is being clawed back so The Scottish Government can spend more of your money as it sees fit.

"We now need to know whether the loyalties of the local SNP MP lie with The Scottish Government or the hard working constituents who will be hit by her Party's decision."