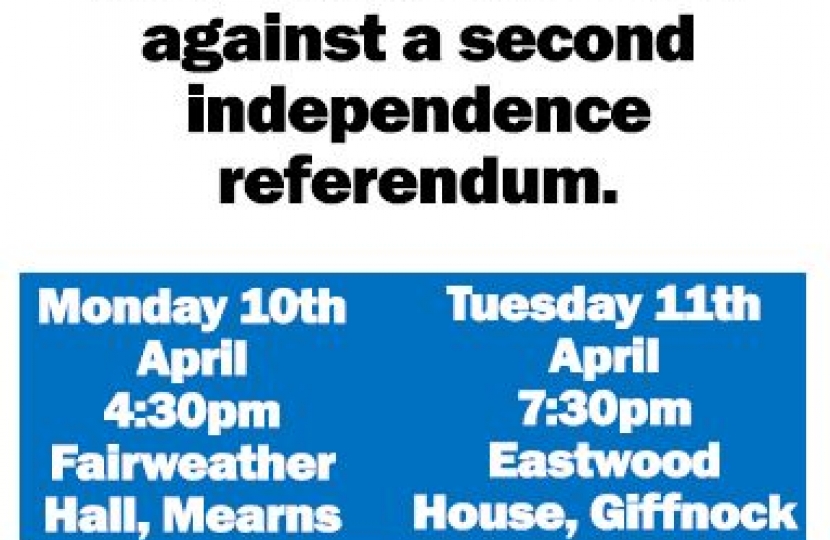 Jackson Carlaw MSP is to hold two 'No to Independence' events in Eastwood following upon Nicola Sturgeon's commitment to hold another secession referendum.

They will be held on Monday, 10th April and Tuesday, 11th April in Fairweather Hall, Newton Mearns and Eastwood House, Giffnock.

East Renfrewshire had one of the highest turnouts for the 2014 referendum when 63.2% of voters locally backed remaining in the United Kingdom.

Following the Brexit vote, the First Minister has demanded a further referendum on Scottish independence although opinion polls consistently show Scots opposed to another independence referendum.

"The United Kingdom voting to leave the European Union was not a vote for another separation referendum although Nicola Sturgeon seems to think so.

"Another referendum will not help my constituents worried about their and their families' futures.

"The First Minister has turned into a crank who believes she has the answers to all our problems by putting independence first, last and always.

"Everyday concerns of Scots are now on hold while The Scottish Government focus on 'independence'.

"Just ask her constituents in Govanhill who she continues to fail everyday.

"If you are fed up with the constant push for another referendum, then come along next week and hear the case for our United Kingdom as Scotland deserves better than this referendum obsession."