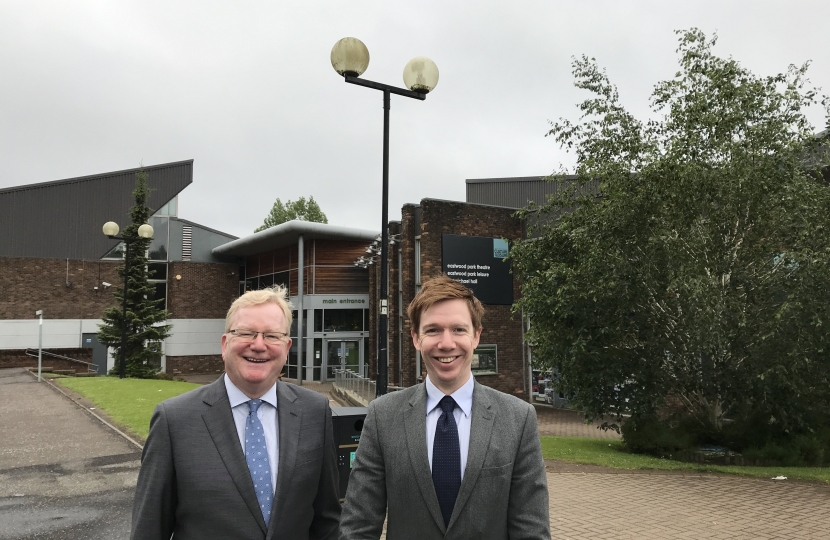 Jackson Carlaw MSP and Paul Masterton MP have welcomed plans from East Renfrewshire Council to build a brand new leisure centre next to the site of the current facility within Eastwood Park and in the process, ditch proposals to construct a leisure complex on either Shawwood Park or Broomburn Park.

It has been announced that councillors will be asked to approve a report designating Eastwood Park as the 'first preference' site for construction of a new leisure facility when the full council next meets on Wednesday 26th June.

At a previous full council meeting in October 2018, a report identifying Shawwood Park as the first preference site for a new leisure centre and Broomburn Park as the second favoured location was waived through by the SNP and Labour Coalition.

Mr Carlaw, Mr Masterton and Conservative Councillors have been vocal opponents of the proposals to rip up the much loved greenfield sites throughout and have stood up for the local community in Newton Mearns who made clear they were firmly against the loss of either park to make way for a new leisure centre.

At the end of last year, Mr Carlaw and Mr Masterton issued a survey to households living nearby both Shawwood Park and Broomburn Park with 89.5 percent of respondents stating their firm opposition to leisure centre development on the former and 91.7 percent noting likewise for the latter.

The Scottish Conservative parliamentarians have been continuing to pursue the issue with East Renfrewshire Council and last made official representation to the local authority only a matter of weeks ago to re-iterate their opposition to a leisure complex being built on either site and support for leisure centre provision remaining at Eastwood Park.

"From the beginning of the council's consultation process, East Renfrewshire Conservatives have made it absolutely clear that putting one of our ever diminishing greenfield sites in the firing line for a new leisure facility was completely the wrong thing to do.

"Paul and I have consistently argued that leisure centre provision should remain at Eastwood Park and we are naturally delighted that plans to build on either Shawwood Park or Broomburn Park now appear to have been thrown on the scrapheap.

"Make no mistake about it, local people will now expect the new leisure centre to be built at Eastwood Park and there can be no attempt to roll back on this at a later date if as expected, councillors rubber stamp it as the first preference site on Wednesday."

"The results of our survey showed the sheer scale of local opposition to the possibility of Shawwood Park and Broomburn Park being sacrificed for a new leisure centre.

"They should never have been considered for inclusion in the first place and it is welcome that a new leisure facility at Eastwood Park is now being recommended for approval as the council's preferred option.

"The local community have worked tirelessly to protect these hugely important and valued greenfield sites. This will be a victory for them and all their efforts if a new Eastwood Park facility is endorsed by full council."

"As councillor for the local area, I was completely aghast at seeing Shawwood Park and Broomburn Park thrown into the mix for a leisure centre construction project and even more so after they were recommended as the most desirable sites!

"That's why I moved a motion on behalf of the Conservative group at the October full council meeting calling on elected members to join with us in making the commitment to protect our much loved local green spaces from development but sadly this was rejected.

"It's fantastic news that what the Conservatives proposed in October has now been adopted by the SNP and Labour with the report also recommending that both Shawwood Park and Broomburn Park be retained as protected urban green spaces.”